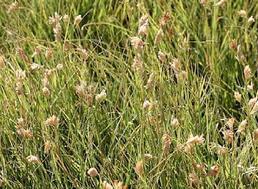 Buffalograss is a low-growing, sod forming grass that has separate male and female plants. The grass is a grayish-green during growth and turns yellow during maturity. Buffalograss is excellent for grazing cattle and sheep and fair for goats. Cattle will preferentially graze the grass to the point of causing bare areas. This said, it is difficult for cattle to overgraze the short leaves and stems. Buffalograss cures well for winter grazing. An excellent grass for erosion control areas, Buffalograss  also can make an excellent native turf growing 4 - 6 inches tall. As such, it is often used to replace non-native warm season grasses, such as bermudagrass, in lower traffic areas. Buffalograss is consumed by several species of prairie animals including white tailed deer, bison, and prairie dogs. 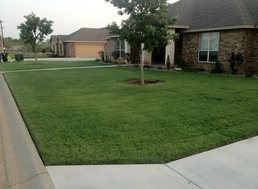